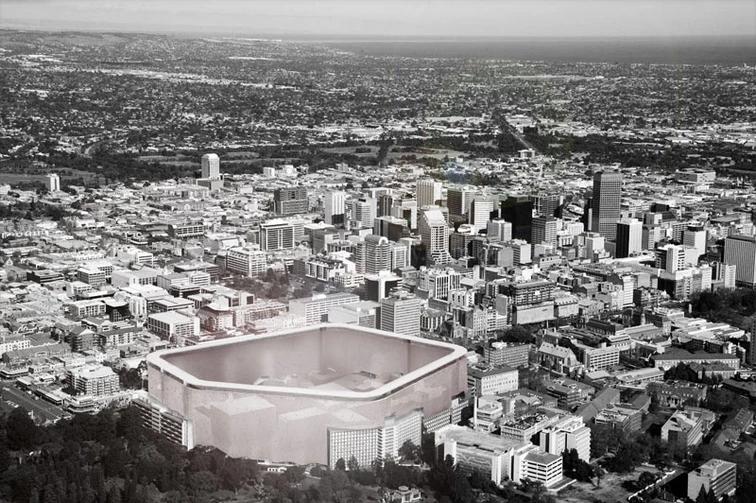 ​The Adelaide Jellyfish is an urban intervention that encapsulates the idea of unifying a city district by consolidating buildings into a new urban space experience. A sky-walk ring circles the perimeter of the site not only creating a 360 view of the city, but generating a new urban artifact that speaks to the scale and growth of the city. This iconic gesture becomes a portal that connects the city center to its parks and extending neighborhoods. It is important to have a space to overview the city in order to understand its clear structure of parks systems, its infrastructure, its core, the connection to nature as well as its current and future expansion. This urban artifact has the capacity of addressing the city scale, which would otherwise be lost.

The unification of the site as a single district occurs by engulfing the buildings with an oversized curtain that wraps around the perimeter. This urban move creates a new urban space where the in-between is experienced as an interior urban space with an outdoor atmosphere. The translucent curtain not only shades the building and open spaces, reducing energy consumption, but it adds a dynamic and changing spatial quality. The recycled fabric curtain can be adapted with photovoltaic units that allow it to become a flexible solar panel.

The innovation of this strategy comes from its efficiency of architectural moves. The main buildings can be maintained and adaptively reused with new programs such as housing, cultural facilities as well as retail. The ring and curtain allow for all these different buildings to work together, not only preserving their unique architecture but also framing and enhancing the buildings and context.